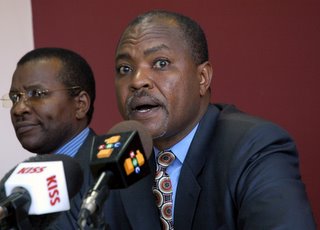 Reporting in local media on the raid on KTN and The Standard is going on. This morning the board of directors (picture) gave a press conference (click here for Windows Media file, streaming comment of an angry Group CEO Paul Mshindi (right on picture and Paul Mely (Group Deputy Chairman). Standard and Nation Dailies came with extra editions on the raids this morning and afternoon. KTN is on air again and everybody is having his say including opposition leader Uhuru Kenyatta who said that this act by the Kenyan government is putting back Kenya two decades into time, thereby indirectly critisizing his former leader Daniel Arap Moi. Others like the responsable Minister of Security Muchucki uses the words: “If you rattle a snake, you should expect to be bitten”, where as his colleague Minister of Information repeated that he is supporting press freedom. Apparently everybody in Kibaki’s government is doing his own thing and there are no spindoctors to streamline the press comments. Big question for Kenyans now: “When will the president speak?”