It’s easy to catch the atmosphere of positive growth, reconstruction in Maputo. Walking through the lush streets, you find people talking, chatting with each other. It seems that everybody is sick of the war, of insecurity and they want to show everybody.

Compared to last year, roads and buildings have been reconstructed and shopping malls are being created. Buildings got a fresh paint.

The atmosphere of growth is in the air. Although the country is still very corrupt according to the locals I was talking to. It can never be as corrupt as Kenya, I always think, when people anywhere in Africa start talking about corruption. But the last days, some things made me change my mind. I will come back to that later.

And also: the Chinese are coming. China was one of the first countries to be visited when Mozambique new president came into power last year. ‘You don’t see them here in Maputo, but they are here’, a Mozambiquan told me.

And I saw ‘them’. In the city centre of Maputo on Lenin Avenue, there was this huge Chinese supermarket with only Chinese products: from noodles, to tea to a kind of vodka-like bottles and the product you can see on the picture below.

I thought the package design very attractive but it didn’t tell me anything about the contents.

As you can see, everything was in Chinese. So I asked to one of the few shop employees what was inside. They looked from me and then to the package and back. Speechless. Laughing. 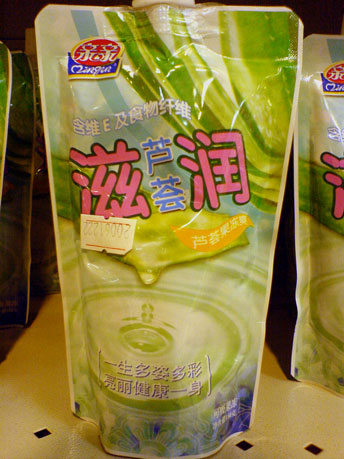 So here I found myself trying to explain in Portuguese, Which I don’t speak, what the Chinese package in the Chinese shop was telling me, but the Mozambiquan employees did nor read or speak Chinese and English.

To make the story more complicated the Chinese who were in the shop, could not tell me or their Portuguese colleagues because of their Chinese. So I bought it: it as a kind of gelly-like-juice with a fruity taste and I am still alive. (Pictures on the way}